Serious Chart (Explanation in Comments)
514
Posted by7 months ago
Archived 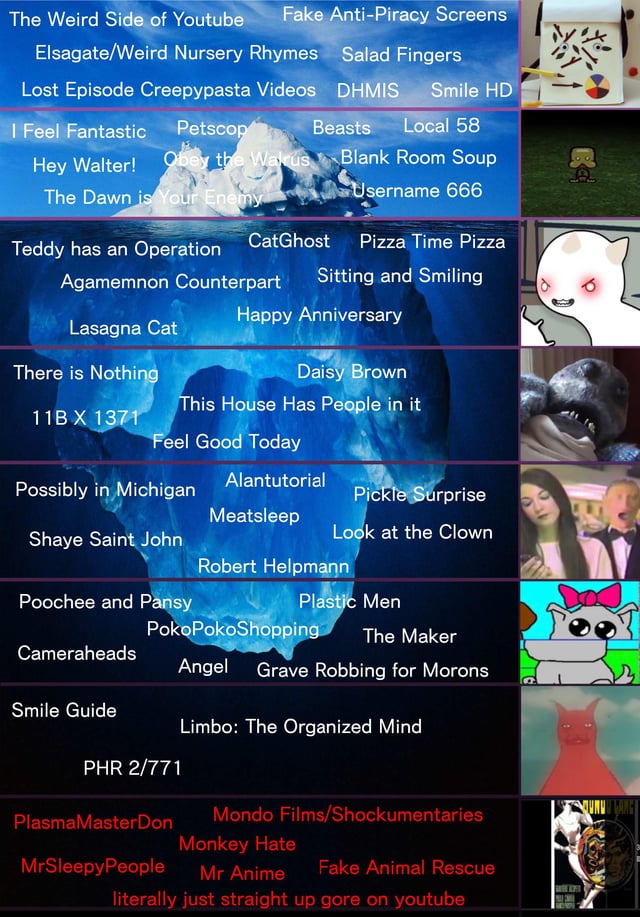 If you’ve been my previous icebergs, this is the last one I know I have a problem. But, at least I learned how to make them not look like total ass!

All of these (outside of the final section) are mainly sorted by obscurity, rather than how dark the content is. Though, I haven’t been particularly in the loop of YouTube horror in a long time so take that with a grain of salt.

I also left out any ARGs that use real victims/cases of murders/kidnappings for shock value because I personally don’t think they deserve attention (happy anniversary and hey walter are different cases because happy anniversary wasn’t an ARG, plus I feel like it’s relevant enough to include, and hey walter was only mistaken as a real case. I’m referring to channels such as Deeper and OO390)

Anyways, sorry for the long block of text. As always I’ll give any explanations that people ask for.

Question: Are you fine if i made a video on this iceberg? I would link it and tell where i got it from

What video is Angel referring to?

Pooche and pansy is just some ms paint series that some edgy 15 year old made because he was mad at his parents.

Honestly, yeah. I just added it because I have a nostalgia based soft spot for it (and I only put it near the bottom since it’s sort of faded into obscurity over time as far as I know).

Promised an explanation in my previous comment, so here's about 25% of them. I'm working on this slowly but surely, cause I have a wicked migraine.

The weird side of YouTube: Just where you can find all of these things, it's just the part of YouTube that isn't mainstream.

Elsagate: The weird side of child YouTube, where the creator of kids videos will sneak in strange fetishes like piss, scat, bondage, & pregnancy into kids videos. Its called elsagate because these topics are most commonly found using the character Elsa. YouTube did a semi-successful purge of this content a bit ago, but it still lurks (check the r/elsagate sub)

Salad Fingers: An art series made by David Firth, its one of the most well known and kickstarted the horror art genre on YouTube.

DHMIS: Don't hug me I'm scared, an art project with multiple parts & a cool backstory, if you havent seen it you're probably under a rock.

smile HD: MLP gore animation to the song "Smile", created by MrDavey for the lulz. Gotta love that man.

I feel Fantastic: another art project, a test for a synthesized voice/robot. This one is a classic

beasts: I'm assuming this is the "Treatsforbeasts" video which is another art project.

Hey Walter!: Video made for the lulz and to scare people. Its a dude who pretends he kidnapped a girl and is showing her off. Many believed it was real, leading to an actual investigation.

Obey the Walrus: a classic, made just to spook people. Consists of stolen footage n the dance routine of a disabled woman named Sandie Crisp. Despite this cruel display of ableism, she went on to be successful. She recently passed away two weeks ago.

Blank room soup: a real video still left unexplained. The costumes are stolen, and the identities and intention of the video are still left unknown. Reignbot made a good video on it.

The dawn is your enemy: adult swim bumper, creeped alot of kids out who woke up to it LOL

Username 666: old video made by Nana, a classic

(taking a small break RN due to migraine)

you should explain what the videos or series are. instead of saying "it's a classic their pretty good"

even the most obvious things have to be explained if your doing one of these.

hey its beeen a while, if you could add 2 more tiers that would be nice! i really wanna know the 4th tiers contents and some of the third!

No other ARG series has effectively disturbed me as much as Meatsleep did.

The multiple people who worked on it did way too good of a job making a series of videos that felt like some kinda obsessive serial killer's tapes.

"nOw YoU LiVe hEre" will forever be stuck in my head.

Wonder what that gore one is about..

I've been on YouTube far too much to know every single one of these & their backstories just by memory.

Probably even worse is the fact I'd put everything here on the highest layer, save for CameraHeads just due to the obscurity and unfortunate loss of the original video.

Same, haha. It was hard to sort everything since I’m so familiar with all the videos/channels.

Other ones id put in:

this is an old comment, but - poppy was never an arg. she was initially an overly elaborate intimidation tactic of titanic sinclair (her then-partner) to further traumatize mars argo. she then took off in popularity and now is her own artist, but her creative origins are actually hella sinister 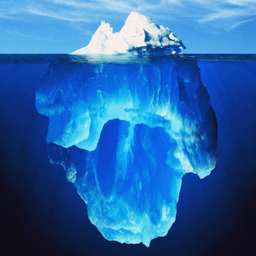 r/IcebergCharts
Welcome to r/IcebergCharts, a subreddit totally unrelated to mapping out icebergs. "Iceberg charts are usually images of an iceberg, captioned humorously so as to convey that the tip of the iceberg is the summation of the knowledge of most people, while the much larger submerged part of the iceberg is the sum of all knowledge of a particular topic."
53.8k